They say university is a chance to reinvent yourself.
For some going to away to study represents a long-awaited chance to break free from old routines, habits and friends, to start afresh.
For others it is an opportunity to do something different, a hair cut perhaps or a whole new wardrobe.
But others take more drastic measures in the days and weeks before they leave to begin their degrees, overhauling all of the above and much more, creating an entirely new persona to parade in front of strangers who don’t know any different.
Of the people I have known take a ‘personality reboot’ the success rate has been mixed. 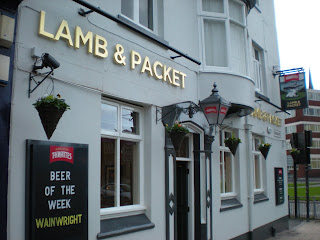 Some, you can immediately tell look really good and feel happy, while others are clunking around in heavy leather boots with nose piercings which have gone septic.
So when the Lamb and Packet reopened after a summer overhaul I was keen to see which route it had taken.
I am seldom shocked walking into a pub because there is generally, very little to be shocked about, but shocked I was.
The entire interior has been completely stripped out, leaving not a single shred of the old place.
Instead it has been painted a kind of beige colour with bright lighting, high stools, sweeping corner seats and a stylishly tiled floor which all combines to create a clean, airy modern bar.
In terms of a personality reboot, the Lamb and Packet’s has been monumental.
From being a stalwart Friargate drinkers’ pub, unchanged and seemingly unchangeable, it has become the ultra sharp, chic bar of a post-smoking ban era.
For a while I lamented the sweeping away of a traditional pub’s character.
But as I worked my way through my pint of Thwaites Wainwright, I came round to thinking there could not be too many people who will miss the old place, otherwise it would not have had to change.
There was one major drawback however, which jarred horribly with me – the music.
I didn’t notice it so much when I first went in, so taken aback I was with the pub’s new look, but with disco beats and happy/scratty/ yappie pop tunes blaring out, it was hard to ignore for long.
I went back a second time, praying I had caught it at a bad moment, but instead found myself tearing my hair out a second time.
For me, when it is late afternoon something a little quieter would be better and if they feel the need to roll out the disco beats, at least wait until Saturday night when people are in the mood.
With this ultra fresh facelift and an enticingly cheap food menu, the Lamb and Packet seems to be reaching out for the students who are about to converge on the city with freshly replenished loans and their latest new looks to flaunt.
It was a brave move taking such an extreme shift in image and despite the music, I am sure this is one personality reboot which is here to stay.